“The mission of the United States Tax Court is to provide a national forum to expeditiously resolve disputes between taxpayers and the Internal Revenue Service while carefully considering the merits of each case and ensuring the uniform interpretation of the Internal Revenue Code.  The Court is committed to providing taxpayers, most of whom are self-represented, with a convenient place of trial and, when their disputes involve relatively small amounts of tax dollars, simplified procedures.“

The United States Tax Court is a court of record established by Congress under Article I of the U.S. Constitution.   When the Commissioner of Internal Revenue has determined a tax deficiency, the taxpayer may dispute the deficiency in the Tax Court before paying any disputed amount.  The Tax Court’s jurisdiction also includes the authority to redetermine transferee liability, make certain types of declaratory judgments, adjust partnership items, order abatement of interest, award administrative and litigation costs, redetermine worker classification, determine relief from joint and several liability on a joint return, review certain collection actions, and review awards to whistleblowers who provide information to the Commissioner of Internal Revenue on or after December 20, 2006.

The Tax Court is composed of 19 presidentially appointed members.  Trial sessions are conducted and other work of the Court is performed by those judges, by senior judges serving on recall, and by special trial judges.  All of the judges have expertise in the tax laws and apply that expertise in a manner to ensure that taxpayers are assessed only what they owe, and no more. Although the Court is physically located in Washington, D.C., the judges travel nationwide to conduct trials in various designated cities.

A case in the Tax Court is commenced by the filing of a petition.  The petition must be timely filed within the allowable time.  The Court cannot extend the time for filing which is set by statute.

Cases are calendared for trial as soon as practicable (on a first in/ first out basis) after the case becomes at issue.  When a case is calendared, the parties are notified by the Court of the date, time, and place of trial.  Trials are conducted before one judge, without a jury, and taxpayers are permitted to represent themselves if they desire.  Taxpayers may be represented by practitioners admitted to the bar of the Tax Court.

Most cases are settled by mutual agreement without trial.  However, if a trial is conducted, in due course a report is ordinarily issued by the presiding judge setting forth findings of fact and an opinion.  The case is then closed in accordance with the judge’s opinion by entry of a decision.

Rules of The Tax Court

Brief History of the Tax Court:

The first incarnation of the Tax Court was the “U.S. Board of Tax Appeals”, established by Congress in the Revenue Act of 1924 [2] [3] (also known as the Mellon tax bill) in order to address the increasing complexity of tax-related litigation. Those serving on the Board were simply designated as “members.” The members of the Board were empowered to select, on a biennial basis, one of their members as “chairman.” [4]  The Board originally had 16 members, with Charles D. Hamel serving as the first Chairman. [5]  The Board was initially established as an “independent agency in the executive branch of the government. [6]  It was housed in the Internal Revenue Service Building in the Federal Triangle. [7]  The first session of the Board of Tax Appeals spanned July 16, 1924 to May 31, 1925. [8]

In 1929, the United States Supreme Court indicated that the Board of Tax Appeals was not a “court,” but was instead “an executive or administrative board, upon the decision of which the parties are given an opportunity to base a petition for review to the courts after the administrative inquiry of the Board has been had and decided. [9]

In 1942, Congress passed the Revenue Act of 1942, renaming the Board as the “Tax Court of the United States.” [10]   With this change, the Members became Judges and the Chairman became the Presiding Judge. By 1956, overcrowding and the desire to separate judicial and executive powers led to initial attempts to relocate the court. In 1962, Secretary of the Treasury Douglas Dillon appealed to the U.S. General Services Administration (GSA) to incorporate funds for the design of a new building in its upcoming budget. The GSA allocated $450,000, and commissioned renowned architect Victor A. Lundy, who produced a design that was approved in 1966. [11]  However, funding constraints brought on by the Vietnam War delayed the start of construction until 1972. [12]

The Tax Court was again renamed to its current formal designation in the Tax Reform Act of 1969, [13] changing it from an historically administrative court to a full judicial court. The completed United States Tax Court Building was dedicated on November 22, 1974, the fiftieth anniversary of the Revenue Act that created the court. [14]

In 1991, the U.S. Supreme Court in Freytag v. Commissioner stated that the current United States Tax Court is an “Article I legislative court” that “exercises a portion of the judicial power of the United States. [15]  The Court explained the Tax Court “exercises judicial power to the exclusion of any other function” and that it “exercises its judicial power in much the same way as the federal district courts exercise theirs….” [16]  This “exclusively judicial role distinguishes it from other non-Article III tribunals that perform multiple functions…“ [17] Thus, Freytag concluded that the Tax Court exercises “judicial, rather than executive, legislative, or administrative, power.“ [18]   The Tax Court “remains independent of the Executive and Legislative Branches” in the sense that its decisions are not subject to appellate review by Congress, the President, or for that matter, Article III district courts. [17]  The President, however, may remove the Tax Court judges, after notice and opportunity for public hearing, for “inefficiency,” “neglect of duty,” or “malfeasance in office.” [19]

Justice Scalia penned a separate concurrence for four justices in Freytag.  These justices dissented as to the Court majority’s rationale; they would have characterized the Tax Court’s power as “executive” rather than “judicial.” [20]  Scalia said that to him “it seem[ed]… entirely obvious that the Tax Court, like the Internal Revenue Service, the FCC, and the NLRB, exercises executive power.” [21]  Notwithstanding Scalia’s sharp dissents in landmark separation-of-powers cases such as Mistretta v. United States [22] and Morrison v. Olson, [23] Scalia apparently “describe[d] Freytag as the single worst opinion of his incumbency” on the U.S. Supreme Court. [24]

Under an amendment to the Internal Revenue Code of 1986 enacted in late 2015, the U.S. Tax Court “is not an agency of, and shall be independent of, the executive branch of the Government.“ [27] However, section 7443(f) of the Code still provides that a Tax Court judge may be removed by the President “for inefficiency, neglect of duty, or malfeasance in office.“ [28] 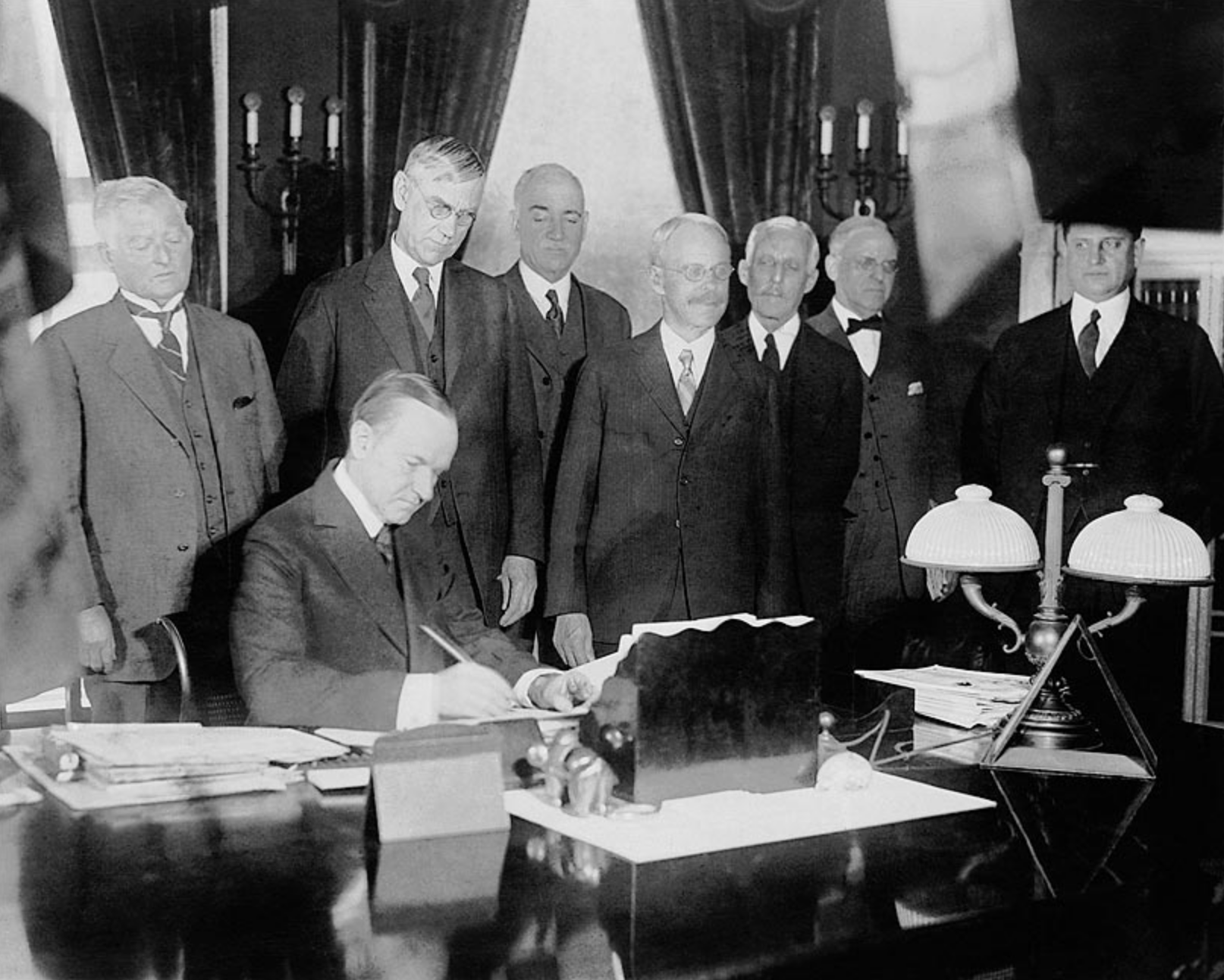 Special thanks to National Photo Company Collection and The McMahan Art Gallery and Archive for the above photo we’re utilizing in accordance with Fair Use.

[23]: 487 U.S. 654, 697 (1988) (Scalia, J., dissenting) (“Frequently an issue of this sort will come before the Court clad, so to speak, in sheep’s clothing: the potential of the asserted principle to effect important change in the equilibrium of power is not immediately evident, and must be discerned by a careful and perceptive analysis. But this wolf comes as a wolf.”).

Back to Legislative Courts