i. “Right to Trial by Jury”
in the U.S. Constitution:

Trial by jury is an essential element in obtaining a fair trial.  The U.S. Declaration of Independence accused George III of “depriving us in many cases, of the benefits of trial by jury.”

Sixth Amendment – for criminal prosecutions, guarantees speedy, public trial with an impartial local jury, to be informed about the accusation and to be confronted with witnesses, to have compulsory process for obtaining witnesses in one’s favor, and to have assistance of counsel.

Seventh Amendment – guarantees “right of trial by jury” and “common rules of evidence” for civil suits.

ii. How to Demand a Jury:

See “How to Demand a Jury Trial“

If a  jury trial is not selected, there will be a:

bench trial – a trial before a judge without a jury; a “nonjury” aka “juryless” trial. — aka trial to the bench; nonjury trial; court trial; trial before the court (TBC); judge trial. [3]

trial by jury in criminal cases

A matter of constitutional or statutory right to a trial by a legal, proper, fair, and impartial jury drawn from a cross section of the community.  31 Am J Rev ed Jury §§ 7 et seq. [1]

1. A body of laymen selected by lot, or by some other fair and impartial means, to ascertain, under the guidance of a judge, the truth in questions of fact arising in either a civil or criminal proceeding.  31 Am J Rev ed Jur § 2.

1. A group of women and men selected according to law to determine the truth.  Juries are used in various types of legal proceedings, both civil and criminal.[2]

1. A group of persons selected according to law and given the power to decide questions of fact and return a verdict in the case submitted to them.  *  In certain contexts, jury embraces any fact-trier, including an arbitrator or a trial judge sitting in a nonjury proceeding. — aka empaneled jury; impaneled jury. [3]

iv. Types of Juries
by Category:

Special or “Struck” Jury – usually at a party’s request, “striking a jury” from a panel drawn specifically for an unusually important or complicated case, followed by allowing parties to alternate in striking from a list any person whom she does not wish to have on the jury.

Blue-Ribbon Jury – consists of persons of particular advanced education or special training in order to hear a complex civil case or to sit in a grand juries.

Dual Juries – two separately impaneled juries for two (or two sets of) defendants in a single trial — some evidence being common to both defendants, and some not — in which each jury renders a separate verdict.

Sheriff’s Jury – selected and summoned by a sheriff to hold inquests for various purposes (i.e. assessing damages, ascertaining the mental condition of an alleged lunatic, or to render verdict re: ownership of personal property seized under execution).

Impartial Jury – a jury that has no opinion about the case at the start of the trial and that bases its verdict on competent legal evidence.

Jury of Peers – a jury comprised of persons equal in status, rank, &/or character as the accused.

Jury of the Vicinage – a jury from the county (“vicinity”) where the crime occurred.

Mixed Jury – a jury composed of both men and women or persons of different races.

Foreign Jury – a jury obtained from a jurisdiction other than that in which the case is brought.

Types of Juries used
to Determine Cause of Death:

Coroner’s Jury – summoned by a coroner to make an inquiry into the cause of death of a person.

Inquest Jury – summoned by a coroner, medical examiner, sheriff, or other ministerial officer in order to determine the cause of death which involved violence or other unlawful means.

Advisory Jury – a jury impaneled in a case in which the parties are not entitled to a jury trial as a matter of right, wherein the verdict is not binding on the case.

Shadow Jury – a group of mock jurors paid to observe a trial and report their reactions to a jury consultant hired by one of the litigants, to provide counsel with information about the jury’s likely reactions to the trial.

Summary Jury Trial (SJT) – a court-ordered settlement technique sometimes used by the federal courts in complex cases that would otherwise require a lengthy jury trial wherein which the parties argue in a mini-trial before a mock jury, generally in order to settle the case based upon the nonbinding verdict presented by the jurors.

Homage Jury – historically, a jury in a court baron, consisting of tenants who made homage to the lord.

Jury de medietate linguae – historically, a jury comprised of half natives and half aliens, allowed when one of the parties is an alien (foreigner).

Jury of Matrons – a jury of “discreet and lawful women” impaneled to try a question of pregnancy, as when a woman sentenced to death pleads, in stay of execution, that she is pregnant, to determine if she is feigning pregnancy.

The following terms are presented in chronological order based on the order they arise before, during, and after a trial:

Jury Fee – a (usually minimal) fee that a party to a civil suit must pay the court clerk to be entitled to a jury trial.

Jury Commissioner – an official who is responsible for compiling jury lists, drawing jurors for a panel, and then summoning them for duty.

Jury List – a roster of all people within a jurisdiction who possess the necessary legal qualifications for jury duty, or a list of people who have been placed on a jury panel.

Jury Process – the papers served on or mailed to potential jurors to compel their attendance, and the procedure by which jurors are summoned and their attendance is enforced.

Jury Duty – the obligation to serve on a jury (verb) or the actual  act of serving (noun).

Jury Panel – the jury (list) empaneled for the trial of a particular case. — aka venire (pronounced “veh-neer”).

Veniremember – a prospective juror; a member of a jury panel.

Voir Dire (Examination) – a preliminary examination of a prospective juror by a judge or litigant(‘s counsel) to decide whether the prospect is qualified and suitable to serve on a jury.

Challenge – request a judge to disqualify a potential juror or an entire jury panel.

Talesmen – a juror summoned from among bystanders in the courthouse to complete a jury panel when, because of challenge or other cause, there is not a petit jury to determine a civil or criminal case because the original jury panel has been exhausted. — aka tales-juror.

Jury Box – that portion of the court room in which the jury are seated during the trial of a case. — aka jury-box.

Fact-Finder – one or more persons who hear testimony and review evidence to rule on a factual issue; the judge (in a bench trial) or a jury.

Sequestration of Jury – a court order prohibiting the members of a jury from having public contact, reading newspapers, watching television (etc) while the trial is in progress until after they deliver their verdict. — aka jury sequestration.

Jury Speech – the opening statement or closing argument in a jury trial.

Opening Statement – at the outset of a trial, an advocate’s statement giving the fact-finder (judge or jury) a preview of the case and of the evidence to be presented.

Special Interrogatory – a written question regarding the facts, directed to the jury, whose answer is required to supplement a general verdict (upon request for a special verdict or special findings).

Closing Argument – a final statement to the judge or jury before deliberation begins, requesting the judge or jury to consider the evidence and to apply the law in one’s favor; afterward (in a jury trial) the judge ordinarily instructs the jury on the law that governs the case.

Request for Instructions – a written request to the judge for jury instructions, made by either party, usually after both sides have rested.

Jury Instructions – given by a judge to a jury concerning the law of the case. — aka instruction; jury charge; charge; jury direction; direction.

Jury Room – the room in a courthouse wherein the jury conducts its deliberations.

Presiding Juror – usually elected by the jury at the start of deliberations, chairs the jury during deliberations and speaks for the jury in court by announcing the verdict. — aka foreman; foreperson; (in Scots law) jury chancellor.

Deliberation (Deliberate) – carefully considering issues and options before making a decision or taking some action; especially, the process by which a jury reaches a verdict, as by analyzing, discussing, and weighing the evidence after closing arguments.

Jury Verdict Form – a document announcing the judgment or verdict of the jury.

Polling the Jury – a procedure whereby each juror who participated in the verdict is asked individually if they support the verdict, or if they were coerced or induced into agreeing.

Embracery – the crime of attempting to corrupt, influence, instruct, or induce a judge or jury other than by evidence or arguments in open court (i.e. threats, bribes). — aka jury-tampering; tampering with jury.

Jury-Fixing – illegally procuring the cooperating of one or more jurors to influence the outcome of the trial.

Rogue Jury – a jury that ignores the law and evidence in reaching a capricious verdict based on unrevealed, deeply held prejudices; on undue sympathy or antipathy toward a party; or on chance (as by tossing a coin), resulting in inappropriate awards, punishments, convictions, or acquittals.

Stealth Juror – deliberately fails to disclose a relevant bias in order to qualify as a juror and bases a decision on that bias rather than on the facts and law; may be fined or prosecuted for perjury.

Separation of Jury – the failure of the officer in charge of the jury to keep them together after they have retired for deliberation, sometimes is in itself ground for a new trial.

Erie Railroad Co. v. Tompkins (1938) – in interpreting the common law, the federal court is bound by declaration of the highest state court on the state law.

ix. Types of Verdicts
a Jury can Render:

Hung Jury – a jury that cannot reach a unanimous verdict or a verdict supported by the requisite number or jurors by the required voting margin.

Jury Nullification – a jury’s knowing and deliberate refusal to apply the law, generally because the law itself is contrary to the jury’s sense of justice, morality, or fairness.

On July 11. 1789, Thomas Jefferson wrote the following about juries (see jury nullification) in a letter to Thomas Paine: 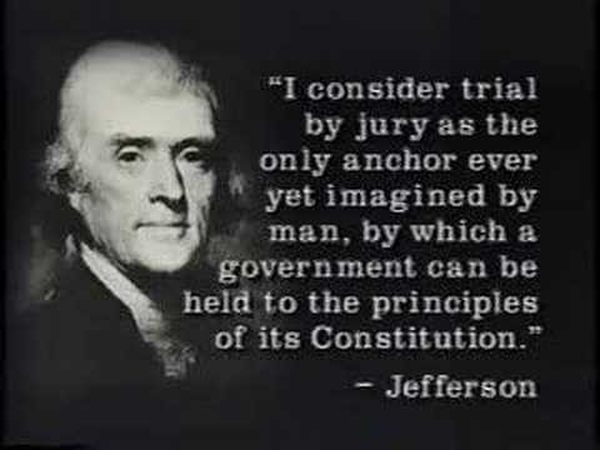 Back to All About Jury Trials

Back to Civil Complaint Self-Help Walkthrough