The 94 federal judicial districts are organized into 12 regional circuits, each of which has a court of appeals.  The appellate court’s task is to determine whether or not the law was applied correctly in the trial court. Appeals courts consist of three judges and do not use a jury.

A court of appeals hears challenges to district court decisions from courts located within its circuit, as well as appeals from decisions of federal administrative agencies.

In addition, the Court of Appeals for the Federal Circuit has nationwide jurisdiction to hear appeals in specialized cases, such as those involving patent laws, and cases decided by the U.S. Court of International Trade and the U.S. Court of Federal Claims.

At a trial in a U.S. District Court, witnesses give testimony and a judge or jury decides who is guilty or not guilty — or who is liable or not liable. The appellate courts do not retry cases or hear new evidence. They do not hear witnesses testify. There is no jury. Appellate courts review the procedures and the decisions in the trial court to make sure that the proceedings were fair and that the proper law was applied correctly.

Before lawyers come to court to argue their appeal, each side submits to the court a written argument called a brief. Briefs can actually be lengthy documents in which lawyers lay out the case for the judges prior to oral arguments in court. [1]  Additional information below.

U.S. Court of Appeal for the Federal Circuit Official Website 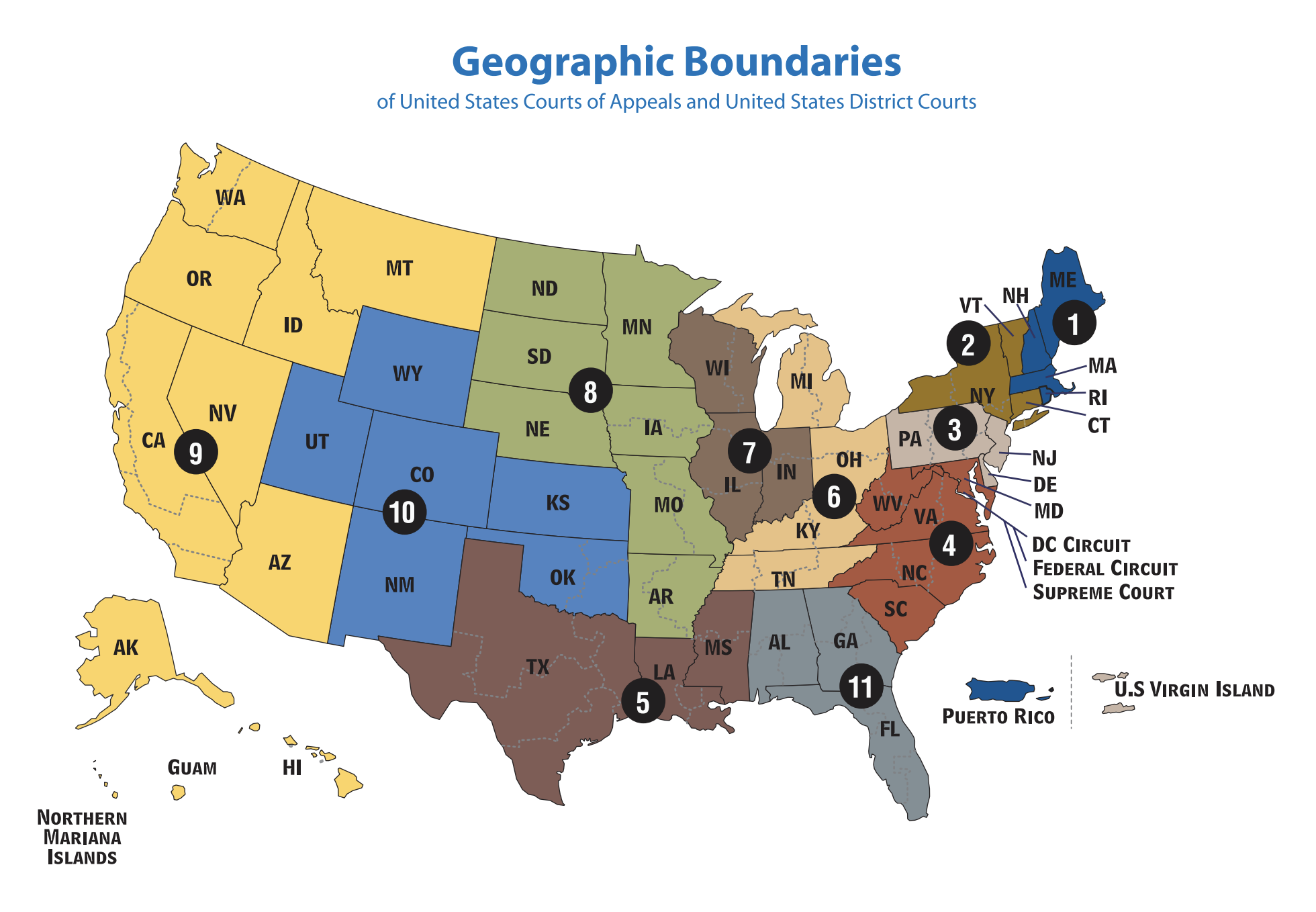 The Review Function
of the Courts of Appeals:

Because the courts of appeals have no control over which cases are brought to them, they deal with both routine and highly important matters.  At one end of the spectrum are frivolous appeals or claims that have no substance and little or no chance for success.  At the other end of the spectrum are the cases that raise major questions of public policy and evoke strong disagreement.  Decisions by the courts of appeals in such cases are likely to establish policy for society as a whole, not just for the specific litigants.  Civil liberties, reapportionment, religion, and education cases provide good examples of the kinds of disputes that may affect all citizens.

There are two purposes of review in the courts of appeals.  The first is error correction. Judges in the various circuits are called upon to monitor the performance of federal district courts and federal agencies and to supervise their application and interpretation of national and state laws.  In doing so, the courts of appeals do not seek out new factual evidence, but instead examine the record of the lower court for errors.  In the process of correcting errors the courts of appeals also settle disputes and enforce national law.

The second function is sorting out and developing those few cases worthy of Supreme Court review.  The circuit judges tackle the legal issues earlier than the Supreme Court justices and may help shape what they consider review-worthy claims.  Judicial scholars have found that appealed cases often differ in their second hearing from their first.

As an illustration of the far-reaching impact of circuit court judges, consider the decision in a case involving the Fifth Circuit.  For several years the University of Texas Law School (as well as many other law schools across the country) had been granting preference to African American and Mexican American applicants to increase the enrollment of minority students.  This practice was challenged in a federal district court on the ground that it discriminated against white and nonpreferred minority applicants in violation of the Fourteenth Amendment.  On March 18, 1996, a panel of Fifth Circuit judges ruled in Hopwood v. Texas that the Fourteenth Amendment does not permit the school to discriminate in this way and that the law school may not use race as a factor in law school admissions.  The U.S. Supreme Court denied a petition for a writ of certiorari in the case, thus leaving it the law of the land in Texas, Louisiana, and Mississippi, the states comprising the Fifth Circuit.  Although it may technically be true that only schools in the Fifth Circuit are affected by the ruling, an editorial in The National Law Journal indicates otherwise, noting that while some “might argue that Hopwood’s impact is limited to three states in the South…, the truth is that across the country law school (and other) deans, fearing similar litigation, are scrambling to come up with an alternative to affirmative action.“

The Courts of Appeals at Work:

The courts of appeals do not have the same degree of discretion as the Supreme Court to decide whether to accept a case.  Still, circuit judges have developed methods for using their time as efficiently as possible.

Screening – During the screening stage the judges decide whether to give an appeal a full review or to dispose of it in some other way.  The docket may be reduced to some extent by consolidating similar claims into single cases, a process that also results in a uniform decision.  In deciding which cases can be disposed of without oral argument, the courts of appeals increasingly rely on law clerks or staff attorneys.  These court personnel read petitions and briefs and then submit recommendations to the judges.  As a result, many cases are disposed of without reaching the oral argument stage.

Three-Judge Panels – Those cases given the full treatment are normally considered by panels of three judges rather than by all the judges in the circuit.  This means that several cases can be heard at the same time by different three-judge panels, often sitting in different cities throughout the circuit.

En Banc Proceedings –  Occasionally, different three-judge panels within the same circuit may reach conflicting decisions in similar cases.  To resolve such conflicts and to promote circuit unanimity, federal statutes provide for an “en banc” (Old French for high seat)procedure in which all the circuit’s judges sit together on a panel and decide a case.  The exception to this general rule occurs in the large Ninth Circuit where assembling all the judges becomes too cumbersome. There, en banc panels normally consist of 11 judges.  The en banc procedure may also be used when the case concerns an issue of extraordinary importance.

Oral Argument – Cases that have survived the screening process and have not been settled by the litigants are scheduled for oral argument.  Attorneys for each side are given a short amount of time (as little as 10 minutes) to discuss the points made in their written briefs and to answer questions from the judges.

The Decision – Following the oral argument, the judges may confer briefly and, if they are in agreement, may announce their decision immediately.  Otherwise, a decision will be announced only after the judges confer at greater length.  Following the conference, some decisions will be announced with a brief order or per curiam opinion of the court.  A small portion of decisions will be accompanied by a longer, signed opinion and perhaps even dissenting and concurring opinions. Recent years have seen a general decrease in the number of published opinions, although circuits vary in their practices.

The new administration of Thomas Jefferson strongly opposed this action, and Congress repealed it.  The Circuit Court Act of 1802 restored circuit riding by Supreme Court justices and expanded the number of circuits.  However, the legislation allowed the circuit court to be presided over by a single district judge. Such a change may seem slight, but it proved to be of great importance. Increasingly, the district judges began to assume responsibility for both district and circuit courts. In practice, then, original and appellate jurisdiction were both in the hands of the district judges.

The next major step in the development of the courts of appeals did not come until 1869, when Congress approved a measure that authorized the appointment of nine new circuit judges and reduced the Supreme Court justices’ circuit court duty to one term every two years. Still, the High Court was flooded with cases because there were no limitations on the right of appeal to the Supreme Court.

The next step in the evolution of the courts of appeals came in 1911.  In that year Congress passed legislation abolishing the old circuit courts, which had no appellate jurisdiction and frequently duplicated the functions of district courts.

Today the intermediate appellate tribunals are officially known as courts of appeals, but they continue to be referred to colloquially as circuit courts.  There are now 12 regional courts of appeals, staffed by 179 authorized courts of appeals judges.  The courts of appeals are responsible for reviewing cases appealed from federal district courts (and in some cases from administrative agencies) within the boundaries of the circuit.  A specialized appellate court came into existence in 1982 when Congress established the Federal Circuit, a jurisdictional rather than a geographic circuit. [2]

[1]: United States Courts, “About the U.S. Courts of Appeals”: http://www.uscourts.gov/about-federal-courts/court-role-and-structure/about-us-courts-appeals

Back to All Federal Courts
histories, purposes, and functions