“[Law Latin ‘that you have the body’] (18c.) A writ employed to bring a person before a court, most frequently to ensure that the person’s imprisonment or detention is not illegal (habeas corpus ad subjiciendum). In addition to being used to test the legality of an arrest or commitment, the writ may be used to obtain judicial review of

1.) the regularity of the extradition process
2.) the right to or amount of bail
3.) the jurisdiction of a court that has imposed a criminal sentence.

“The writ of habeas corpus, by which the legal authority under which a person may be detained can be challenged, is of immemorial antiquity. After a checkered career in which it was involved in the struggles between the common-law courts and the Courts of Chancery and the Star Chamber, as well as in the conflicts between Parliament & the crown, the protection of the writ was firmly written into English law by the Habeas Corpus
Act of 1679. Today it is said to be ‘perhaps the most important writ known to the constitutional law of England….”

“1. One of the four great charters of English liberty (31 Car. 2, 1679), securing to English subjects speedy relief from all unlawful imprisonments. The other three great charters are Magna Carta, the Petition of Right (3 Car. 1, 1628), and the Bill of Rights (1 Wm. 81 M. 1689). The Habeas Corpus Act does not apply in Scotland; the corresponding statute is the Criminal Procedure Act of 1701, ch. 6. 2. A statute deriving ultimately from the English statute and enacted in the United States as a constitutional guarantee of personal liberty.”

The Writ of Habeas Corpus, or “Great Writ,” commands an individual or a government official who has restrained another to produce the prisoner at a designated time & place so the court can determine the legality of custody & decide whether to order the prisoner’s release.

The writ directs a person, usually a prison warden, to produce the prisoner & justify the prisoner’s detention.  If the prisoner argues successfully that the incarceration is in violation of a constitutional right, the court may order the prisoner’s release.  Habeas corpus relief may be used:

An inmate in state or federal prison asks for the writ by filing a petition with the court that sentenced him or her.  In most states, and in federal courts, the inmate is given the opportunity to present a short oral argument in a hearing before the court.  He or she may also may receive an evidentiary hearing to establish evidence for the petition.

The habeas corpus concept was first expressed in the Magna Charta, a constitutional document forced on King John by English landowners at Runnymede on June 15, 1215.  Among the liberties declared in the Magna Charta was that “No free man shall be seized, or imprisoned, or disseized, or outlawed, or exiled, or injured in any way, nor will we enter on him or send against him except by the lawful judgment of his peers, or by the law of the land.”  This principle evolved to mean that no person should be deprived of freedom without Due Process of Law.

The only reference to the Writ of Habeas Corpus in the U.S. Constitution is contained in

The Privilege of the Writ of Habeas Corpus shall not be suspended, unless when in Cases of Rebellion or Invasion the public safety may require it.

Habeas corpus is an extraordinary remedy because it gives a court the power to release a prisoner after the prisoner has been processed through the criminal justice system, with all the procedural safeguards & appeals.  For this reason, the burden is initially on the petitioning prisoner to prove that he or she is being held in violation of a constitutional right.  If the petitioner can meet this burden with sufficient evidence, the burden then shifts to the warden to justify the imprisonment. [1]

If there is no legal basis for detention or incarceration, the court orders the release of the prisoner.

In English practice, the writ addressed detentions before trial, not defects that might have occurred during trial, but American practice has greatly expanded its sweep & availability.

The  Great Writ was one of the many imports from England, where Sir William Blackstone described it in his Commentaries on the Laws of England as “the glory of the English law”.  The right of citizens to demand review of their incarceration was an essential protection against government abuse, which, Blackstone noted, “does not always arise from the ill-nature, but sometimes from the mere inattention, of government.”  The colonial governments agreed, and, despite the Crown’s position that habeas was not available in the colonies, writs of habeas corpus (literally, “you shall have the body”) were issued before the Revolution.

In The Federalist No. 84, Alexander Hamilton stressed the importance of the writ of habeas corpus to protect against “the favorite & most formidable instruments of tyranny.”  By 1787, several state constitutions already guaranteed habeas corpus, & there was fairly uniform agreement that it would be one of the basic guarantees in the American Republic.

At the Constitutional Convention, & the later state ratification conventions, one of the most divisive issues was the failure to ban absolutely any suspension of the writ.  Luther Martin argued that the power would be “an engine of oppression” that could be used by the federal government to declare any state opposition to federal law, “however arbitrary & unconstitutional”, an act of rebellion. Nonetheless, a general consensus emerged: there could be circumstances where the writ had to be suspended in the most extreme conditions of war or invasion.

Chief Justice John Marshall concluded in Ex parte Bollman (1807) that the Judiciary Act of 1789 (officially titled “An Act to Establish the Judicial Courts of the United States,”) granted only federal courts the power to issue writs for federal prisoners, & ruled that the Habeas Corpus Clause dealt only with prisoners in federal authority.  The Supreme Court has built the modern view of habeas around this interpretation, effectively preventing any state court from exercising habeas authority over a federal prisoner:

Under What Circumstances Can “The Right To Habeas Corpus” be Suspended?

One of the most obvious ambiguities in the Habeas Corpus Clause is the absence of an affirmative grant of the right to suspend habeas corpus.  Written in the negative, the clause only described the conditions under which it could be suspended.  While controversial during the ratification debate, it has been generally accepted that a right to suspend the writ is implied in the language. The next ambiguity arises from the fact that the clause does not affirmatively state who can suspend the writ. Originally, Charles Pinckney proposed the clause with the words “shall not be suspended by the Legislature.”  This reference to Congress was dropped in the later debate, allowing some to argue that either Congress or the President could suspend habeas corpus.  However, it is notable that the Committee of Style moved the clause from Article III (dealing with the judicial branch) to Article I (dealing with the legislative branch), suggesting that suspension was viewed as a legislative power rather than an Executive (Presidential) or Judicial power.

Congress has suspended the writ only three times:

Conversely, beginning in 1789, Congress passed a number of statutes providing habeas relief for a growing category of prisoners.  Along the way Congress also statutorily granted federal courts the power to issue writs for the release of state prisoners.  Though the first Judiciary Act of 1789 only authorized issuance of the writ for federal prisoners, the writ was made available in federal court to state prisoners through the Habeas Corpus Act of 1867.   Ex parte McCardle (1869).

In all three cases, the Supreme Court directed lower federal courts to hold evidentiary hearings, allowed for successive claims on the same facts, and held that:

“A prisoner is entitled to lodge a habeas petition, even if he failed state law requirements to raise his substantive objectives in a timely manner during trial.“

The Antiterrorism and Effective Death Penalty Act of 1996: placed curbs on the filing of successive (multiple) & frivolous (vague or incompetent) petitions, & required federal courts to presume that state court factual determinations are correct.

With new national security measures following the attacks of September 11, 2001, the legal protections of “the Great Writ” persist.  Congress must declare any suspension of the writ by statute, which it has not done. Accordingly, the writ is available to civilian & military prisoners claiming jurisdictional barriers to their continued detention or incarceration.[2]

There are three types of forms:

This form may be used to enforce U.S. Code Title 18 § 2254 – State custody; remedies in Federal courts in order to challenge the validity of a state judgment of conviction and sentence – download the form:

This form may be used to enforce U.S. Code Title 28 § 2255. Federal custody; remedies on motion attacking sentence if you are challenging the validity of a federal judgment of conviction and sentence – download the form:

Motion to Vacate/Set Aside Sentence

This form may be used to enforce U.S. Code Title § 2241. Power to grant writ in cases where any of the following applies to you:

“Why are we proud? We are proud, first of all, because from the beginning of this Nation, a man can walk upright, no matter who he is, or who she is. He can walk upright and meet his friend–or his enemy; and he does not fear that because that enemy may be in a position of great power that he can be suddenly thrown in jail to rot there without charges and with no recourse to justice. We have the habeas corpus act, and we respect it.“

“Freedom of religion, freedom of the press, freedom of person under protection of habeas corpus; and trial by juries impartially selected, these principles form the bright constellation which has gone before us, and guided our steps through an age of revolution and reformation.“

“The Habeas Corpus secures every man here, alien or citizen, against everything which is not law, whatever shape it may assume.“ 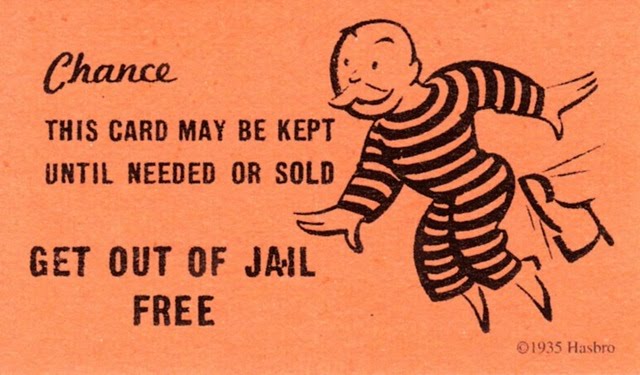 We’re using the above graphic owned by Hasbro, creators of Monopoly, in accordance with Fair Use.

[2]: The Heritage Guide to The Constitution, “Habeas Corpus”: www.heritage.org/constitution/#!/articles/1/essays/61/habeas-corpus

Other Types of Writs

All Types of Writs, Orders, & Motions

www.ReUniteTheStates.org is brought to you by Wild Willpower PAC.