1. A legal doctrine which declares that a government official is exempt from civil liability for injury resulting form his conduct if his action that caused the injury was within the scope of his authority and required the exercise of discretion.

1. The principle that the government — specifically, the United States or any state of the United States — is immune from suit except when it consents to be sued, as, for EXAMPLE: through a statute such as the Federal Tort Claims Act. [3]

1. The principle that the sovereign cannot be sued in is own courts or in any other court without its consent and permission; a principle which applies with full force to the several states fo the Union. 49 Am J1st States § 91.

The principle that a sovereign state is bound to respect hte independence of every other sovereign state, so that the courts of one country will not sit in judgment on the acts of the government of another, done within its own territory. 20 Am J2d Cts § 152. [4]

1. The principle that the government — specifically, the United States or any state of the United States — is immune from suit except when it consents to be sued, as, for EXAMPLE through a statute such as the Federal Tort Claims Act.
See immunity. [5]

The legal defense of “sovereign immunity” is a longstanding legal defense which used to be upheld under a former doctrine known as The Divine Rite of Kings, which had become formally instituted under color of office by James of Stuart, who wrote extensively on this topic.  James claimed that a monarch is subject to no earthly authority, deriving the right to rule directly from the will of God.  The king is thus not subject to the will of his people, the aristocracy, or any other estate of the realm, including (especially in Protestant countries) the Roman Catholic Church.

The doctrine implies that any attempt to depose the king or restrict his powers runs contrary to the will of God, & may constitute a sacrilegious act, punishable by death.  The remote origins of the theory are rooted in the ancient idea that God had bestowed earthly power on the king, just as God had given spiritual power & authority to the church— centering on the pope.  The immediate author of the theory was French jurist & political philosopher Jean Bodin (1530–1596), a member of the Parliament of Paris & professor of law in Toulouse, who is well-known for interpreting Roman law.

The Scots’ textbooks of the divine right of kings were written in 1597–98 by James VI & I before his accession to the English throne.  In his Basilikon Doron, a manual on ”the powers of a king, who inherits from the God the burden of government, whereof he must be countable” he wrote:

“The state of monarchy is the supremest thing upon earth, for kings are not only God’s lieutenants upon earth & sit upon God’s throne, but even by God himself they are called gods. There be three principal [comparisons] that illustrate the state of monarchy… In the Scriptures kings are called gods, & so their power after a certain relation compared to the Divine power. Kings are also compared to fathers of families; for a king is truly parens patriae [parent of the country], the politic father of his people.  And lastly, kings are compared to the head of this microcosm of the body of man.”

Kings are justly called gods, for that they exercise a manner or resemblance of divine power upon earth: for if you will consider the attributes to God, you shall see how they agree in the person of a king. God hath power to create or destroy, make or unmake at his pleasure, to give life or send death, to judge all & to be judged nor accountable to none; to raise low things & to make high things low at his pleasure, & to God are both souls & body due. And the like power have kings: they make & unmake their subjects, they have power of raising & casting down, of life & of death, judges over all their subjects & in all causes & yet accountable to none but God only…

I conclude then this point touching the power of kings with this axiom of divinity, that as to dispute what God may do is blasphemy— so is it sedition (an insurrectionary movement tending towards treason) in subjects to dispute what a king may do in the height of his power. But just kings will ever be willing to declare what they will do, if they will not incur the curse of God. I will not be content that my power be disputed upon; but I shall ever be willing to make the reason appear of all my doings, & rule my actions according to my laws… I would wish you to be careful to avoid three things in the matter of grievances:

First, that you do not meddle with the main points of government; that is my craft… to meddle with that were to lesson me… I must not be taught my office.

Secondly, I would not have you meddle with such ancient rights of mine as I have received from my predecessors. All novelties are dangerous as well in a politic as in a natural body. & therefore I would be loath to be quarreled in my ancient rights & possessions, for that were to judge me unworthy of that which my predecessors had & left me.

And lastly, I pray you beware to exhibit for grievance anything that is established by a settled law. You know I will never give a plausible answer; for it is an undutiful part in subjects to press their king, wherein they know beforehand.“

James’ assertion that the only authority over him was God – & sometimes rather bizarre – for instance, his order that the lower classes should not be allowed to play bowls (“boccie ball” & other yard games). He warned against the dangers of passive smoking, cultivating friendships with Spaniards, & he also called for the protection of forests. 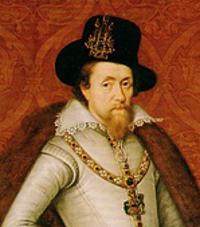 James of Scots became Rightly Challenged by John of Locke and Thomas Paine:

Excerpt from Paine‘s famous pamphlet called Common Sense circulated throughout the Colonies from 1775-1776, thus helping to ignite The American Revolution:

“Mankind being originally equals in the order of creation, the equality could only be destroyed by some subsequent circumstance; the distinctions of rich- and poor.  Oppression is often the consequence… of riches.

Male & female are the distinctions of nature, good & bad the distinctions of heaven; but how a race of men came into the world so exalted above the rest, & distinguished like some new species- is worth investigating, & whether they are the means of happiness or of the misery to mankind… the evils of hereditary succession…

Men who look upon themselves born to reign, & others to obey, soon grow insolent (showing rude & arrogant lack of respect)… their minds are early poisoned by importance… when they succeed to the government they are frequently the most ignorant & unfit of any throughout the dominions.“

(2) hold unlawful and set aside agency action, findings, and conclusions found to be-

(A) arbitrary, capricious, an abuse of discretion, or otherwise not in accordance with law;

(B) contrary to constitutional right, power, privilege, or immunity;

(D) without observance of procedure required by law;

(E) unsupported by substantial evidence in a case subject to sections 556 and 557 of this title or otherwise reviewed on the record of an agency hearing provided by statute; or

(F) unwarranted by the facts to the extent that the facts are subject to trial de novo by the reviewing court.

In making the foregoing determinations, the court shall review the whole record or those parts of it cited by a party, and due account shall be taken of the rule of prejudicial error.

Lawmaking bodies and executives may be held accountable for instituting Illegal laws “that put officers and civilians in harm’s way.”

Officers may be arrested, “Due Process” demanded, and justice may be obtained as a result of color of law crimes.

Legal Precepts Adopted (from Europe) into The U.S. Constitution

§ of Law Embedded into the Constitution Pursuant to the American Revolution

All Types of Court Orders