First off, we would like to offer our sincere condolences to the victims of the recent terrorist attack.  Please let victims & witnesses know they are eligible for assistance through the FBI’s relief for victims program.

Below we are compiling any substantial evidence we can find in relation to this senseless, atrocious, disgraceful act which was met with the best of humanity by many brave peoples’ including officers’ quick responses to the attack.

This page contains several pieces of evidence from the October 1, 2017 Las Vegas terrorist incident.  Please download any of the below videos using KeepVid.com or YouTube Downloader, then upload the video again in another location for the sake of eventually obtaining justice.

All material throughout this website is presented in accordance with Fair Use.

On Monday, September 11, 2017, the following seemingly accurate leak was broadcast via 4chan by a user named “John”: 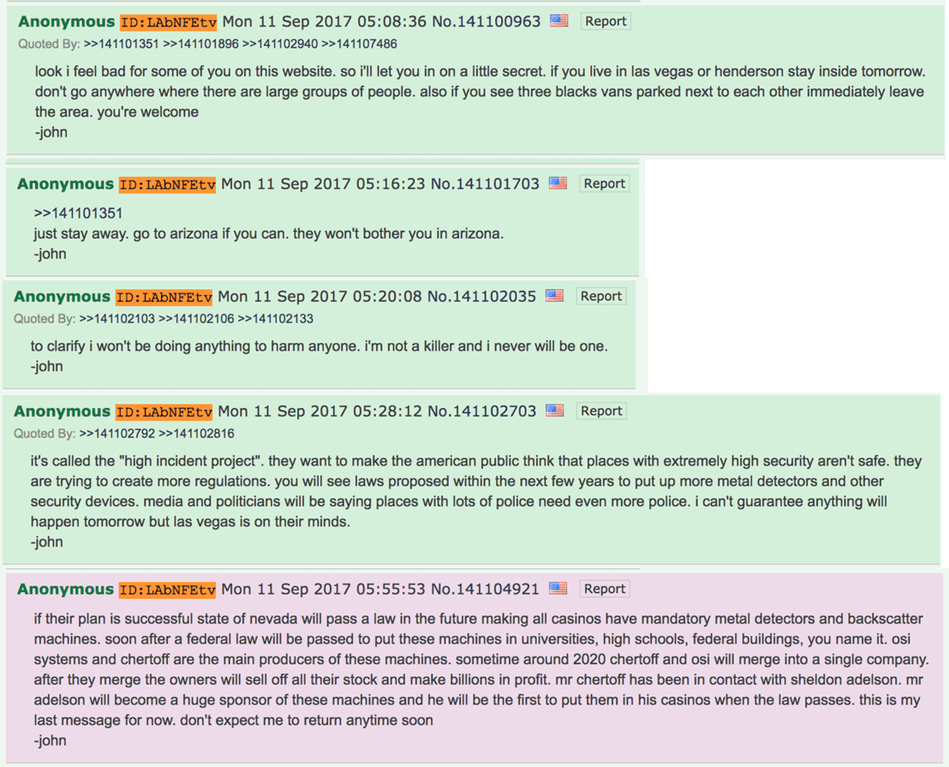 The terrorist attack did not occur until October 3, not long after the Sept. 11 warning if “i can’t guarantee anything will happen tomorrow but las vegas in on their minds.“

The most compelling part about this is that it provides a reasonable motive & line of reasoning wherein otherwise there is none.  Furthermore, the evidence implicates more than one individual whose estates would profit the most off the wave of new regulations:

#1.)  Former head of the Department of Homeland Security & author of USA PATRIOT Act,   Michael Chertoff (served 2005–2009), who, in 2010, was accused of abusing the public trust by raising security fears among average Americans in an attempt to sell his company’s body scanners: 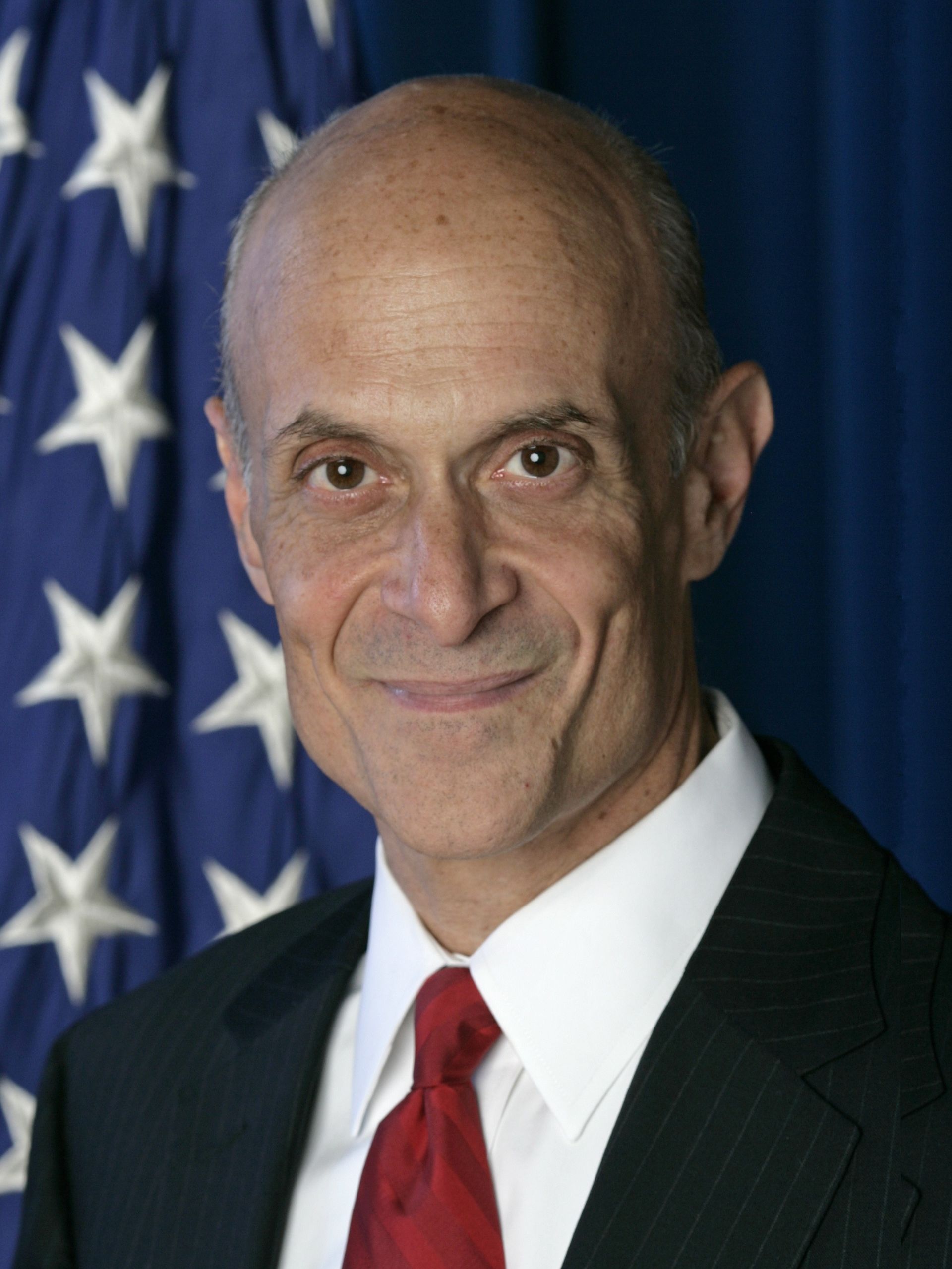 #2.)  Sheldon Adelson is the chairman and chief executive officer of Las Vegas Sands Corporation, which owns the Marina Bay Sands in Singapore and is the parent company of Venetian Macao Limited, which operates The Venetian Resort Hotel Casino and the Sands Expo and Convention Center.  He also owns the Israeli daily newspaper Israel Hayom, and the Las Vegas Review-Journal. [2] He’s also a major contributor to Republican Party candidates, [3] [4] having been the largest donor, of any party, in both the 2012 and 2016 presidential campaigns.  He was the largest donor to Donald Trump‘s 2016 presidential campaign with a total of $25 million. [5]

The above possible leak also indicated that:

As Jack Kenrick of Squawker pointed out in his October 2 article: 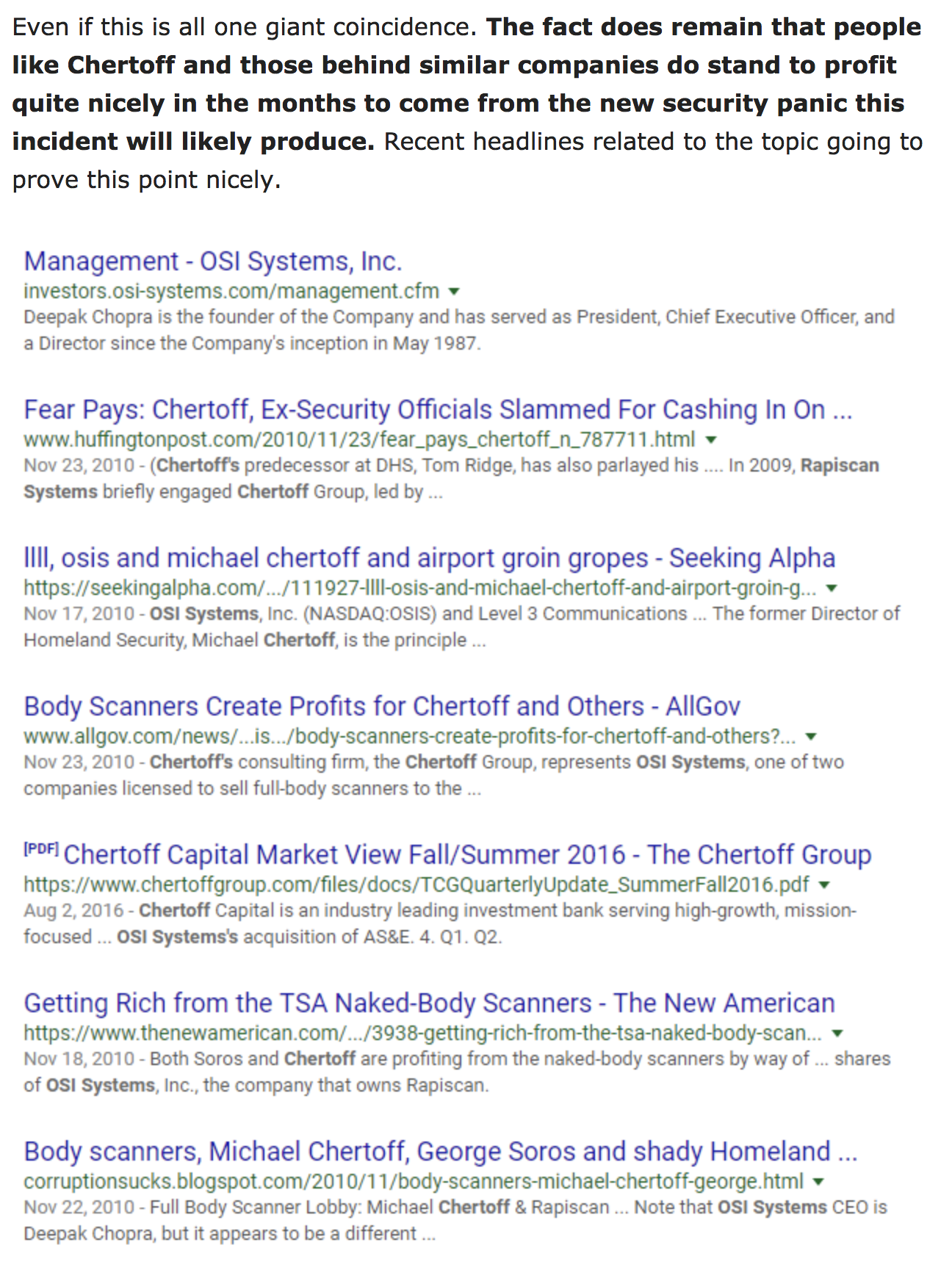 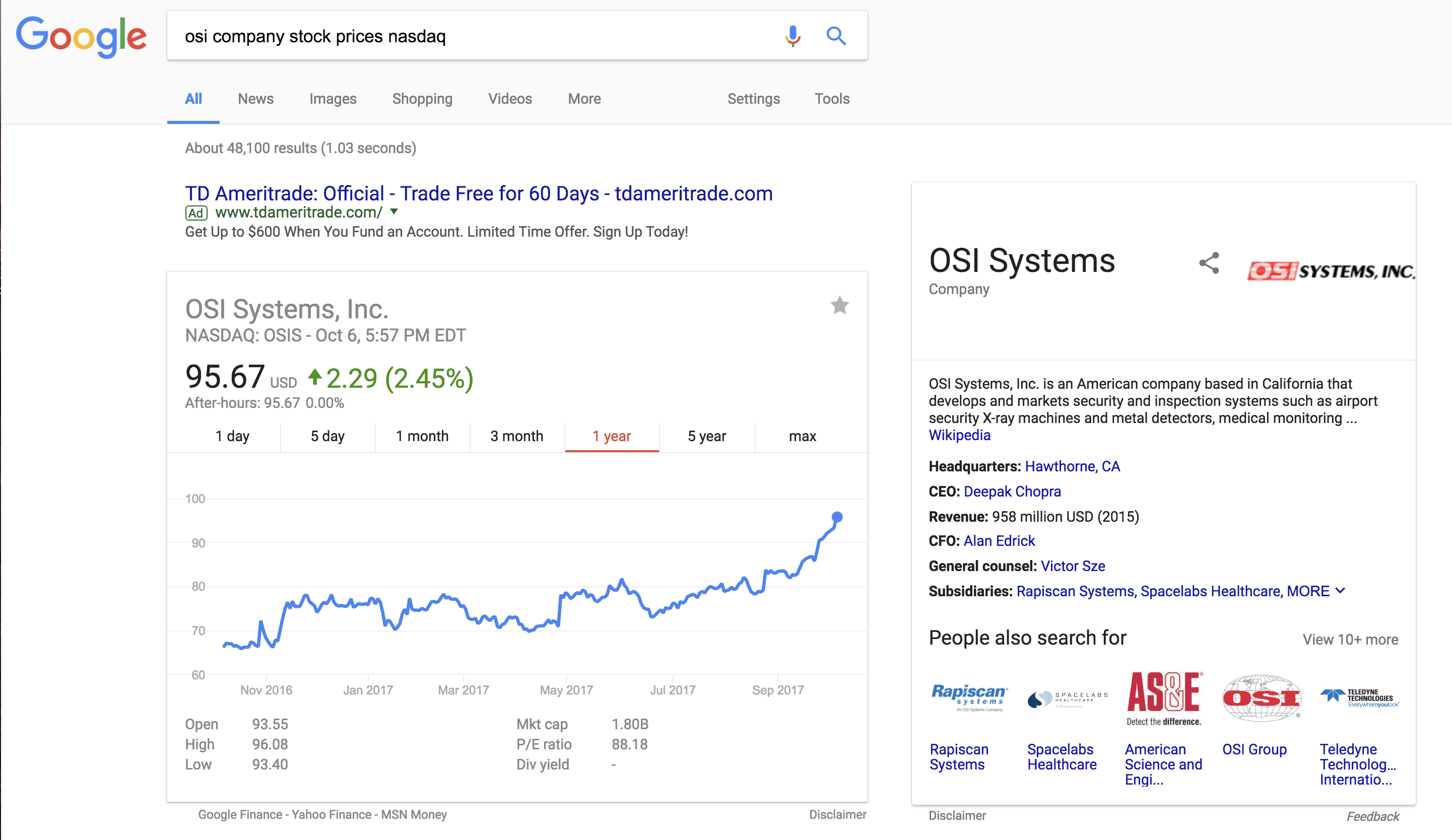 We’ll get back to this soon.  First let’s take a look at additional evidence, including several eye-witness reports of “multiple shooters including gunmen inside several casinos” and several pieces of footage which help validate these accounts:

This video, originally uploaded on October 2 at 8:51am onto Facebook by Jaleesa Myers, appears to show footage of a man dressed in a reflective green security uniform who approaches the crowd from within the concert & begins opening fire before then exiting to the right of the screen after “looking behind his shoulder”.  Some have argued that the flashpoints from the weapon are ‘just lights from the concert”, however upon examination:

In this next video, published by Lisa Fine on Oct 2, it is evident that more than one gun firing from two different locations, at two different distances from one another (one is clearly further away), at 2:05.  The noise from the second gun cannot be an echo, because within several other places throughout the video where there is the sound of gunfire, there is no echo.

This video, uploaded October 3 at 10:32am by  Gianna Peponis, shows footage of a couple giving firsthand testimony as to what they witnessed.  The woman claims that “there needs to be some sort of policy so where when this stuff happens, there’s someone right there to help“.  She goes on to say “there was definitely someone on the ground (shooting)” and that “we started running, & they (the shooters) came in.  There is no way that that guy (she points to Mandalay Bay) was the only shooter”:

This next local news report indicates several pieces of pertinent information.  At the beginning, there is a short clip which shows someone’s comment “OMG someone just started shooting an M16...”.  The screen reads that this is occurring at MGM Grand Hotel & Casino, which is a different location than the Mandalay Bay Casino (there are multiple reports of shootings at multiple casinos).   0:20 the reporter states: “there was an active shooter situation which reported 3 shooters with automatic weapons, both in the concert and from shooting victims inside the hotel, on the 29th, 32nd, & 35th floors.  A security guard was shot in the leg on the 29th floor.  An officer was shot in the shoulder out on the Las Vegas Boulevard area…“

Here you will here an automatic weapon firing from two locations, which the cab driver witnessing filming explains:

Evidence #8
Evidence #1 Appears to Be On Point with Predictions:

On Oct. 5, the micro-doc “Eerie Predictions from Vegas”, by Truthstream Media, was uploaded via You Won’t See This On TV, which further analyzes the above information, while also foreshadowing how U.S. Homeland Security Agency’s National Infrastructure Advisory Council member James Murren, who is also the Chairman and Chief Executive Officer of MGM Resorts International (see Evidence #6) fits into the equation:

This documentary about the recent event in Las Vegas will blow your mind… Thoughts?-"Eerie Predictions from Vegas" – by Truthstream Media

In this video, posted Oct. 4 by The People’s Voice, the woman narrating provides firsthand testimony and video evidence from within the Bellagio Casino that there were shootings in the lobby, & that guests were on lockdown in a particular area of the casino.  A security guard confirms that “what is being shown on television is not accurate” and that a shooting did also occur inside the Bellagio:

Evidence #10
Detailed Testimony of “4-5 Shooters” from a Survivor:

The following testimony was uploaded by Gio Rios on Oct 4:

At 3:42 there is audio evidence of more than one gunman:

The following audio of the Las Vegas Metropolitan Police Scanner is found inside the Oct. 6 article by Neon Nettle, “Las Vegas Shooting Victim: ‘I Was Shot by a Gunman in the Crowd” by Jay Greenberg.  In the article, Rocky Palermo claims to have been shot by a gunman who was “In the crowd” & that there were “3-5 active shooters in the crowd”.  Audio of police scanner features:

On October 4 ABC News claims that Paddock “Possibly checked into multiple hotels before the attack“:

Caesar’s Palace, founded by William F. Harrah, also contains a reported shooting from within the casino, as reported by Cassie Harrison: 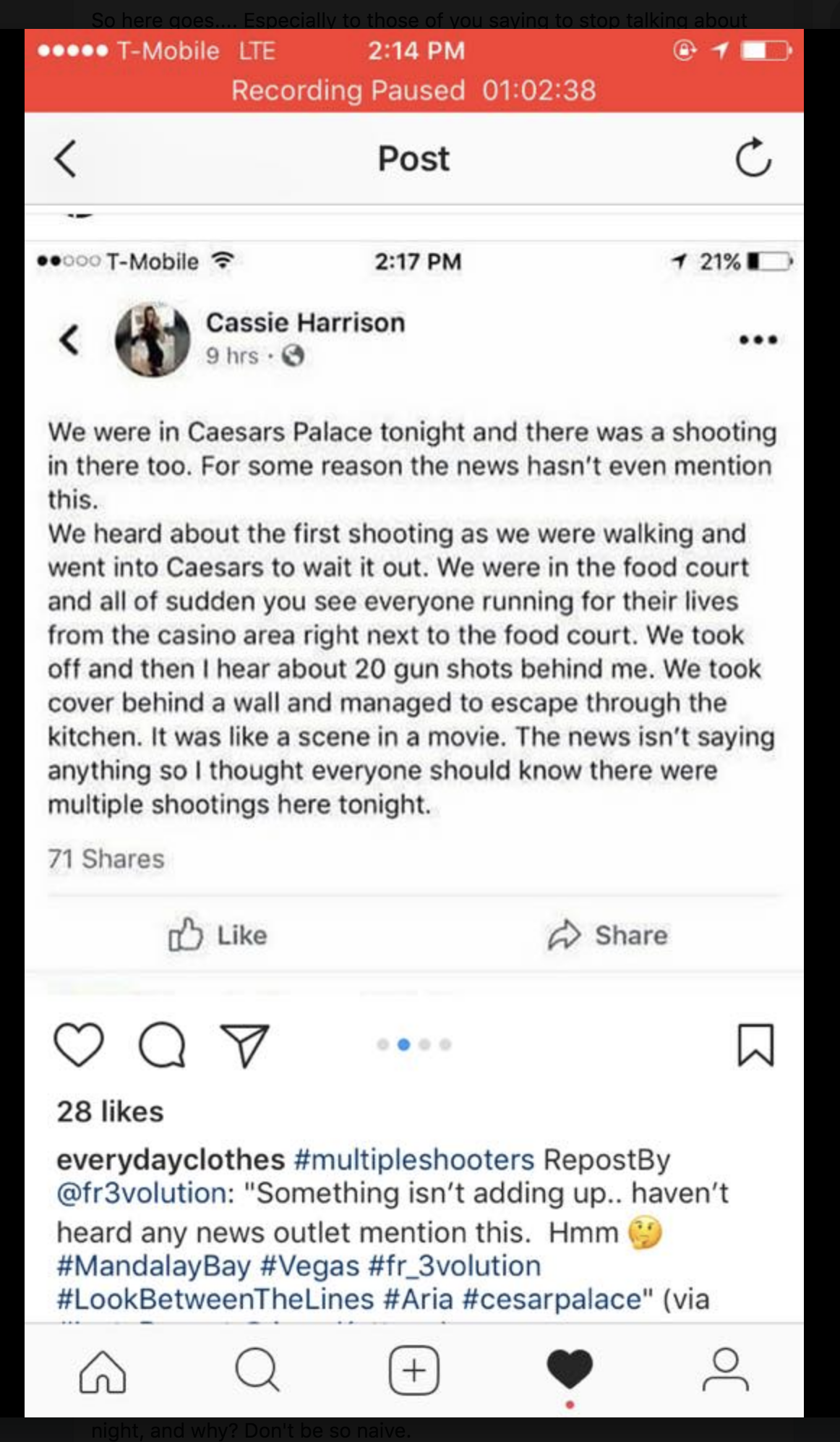 Evidence #15
More Than 2 Windows Shot Out of Mandalay Bay:

On Oct 3 the following video was uploaded by Rosie Unmasked, which is also embedded in the article “Second Shooter? 7 Second Twitter Video Shows Lower Floor Broken Windows at Mandalay Bay” by Saboteur365:

Evidence #16
Woman Warned of Attack Ahead of Time:

In an interview with KSNV News 3, a 21-year-old concertgoer named “Briona” says about 45 minutes before shooting started an unidentified woman told people “You’re all gonna die…“

On August 23, 2016, an article by Las Vegas Review Journal entitled “MGM’s CEO risks angering many of his customers” by Wayne Allyn Root wrote “with his latest political gambit, James Murren, CEO of MGM Resorts International (and U.S. Homeland Security Agency’s National Infrastructure Advisory Council member and owner of the Aria and New York New York casinos where shooters were also reported), has violated the trust of his board, shareholders, employees and customers.  And not in a small way. In a “Vegas bigger-than-life way.”

In response to what he sees as the racism, bigotry, intolerance and violence in the wake of Charlottesville, Murren announced last week that MGM will match employee contributions to a collection of groups that include extreme leftist organizations and Muslim advocacy outfits.

Murren is so wildly wrong, so spectacularly reckless, so disastrously offensive to many of his customers, I believe it’s time for a shareholder revolt.

Not because of his personal views.  I don’t care about them . It’s a free country.  But no CEO should involve his company in controversial politics, let alone the funding of extreme and radical organizations.  Murren has just put MGM in bed with an organization that has ties to Islamic terrorism.

The article is referencing the fact that CAIR has been implicated by the FBI in funding Hamas.

Is this a group MGM’s board or shareholders want to be tied to?

It gets worse. Murren announced that MGM would match employee donations to the Council on American Islamic Relations. This outfit was named by the Justice Department as “an unindicted co-conspirator” to Muslim terrorism. The group has been linked to Hamas. In addition, CAIR advises Muslims not to cooperate with the FBI.

But don’t take my word for it. In 2003, liberal Democrat Sen. Charles Schumer said, ‘CAIR has ties to terrorism.‘”

To people with a strong sense of morality— who have a sense for discerning between “right” from “wrong” or “good” from “bad”, it is unfathomable to think of how anyone could display the absolute nihilism involved in murdering people.  However, upon knowing that this type of disregard for life does exist, it becomes easier to acknowledge that this type of nihilism exists in many forms unfortunately.  On October 4, the following video was posted by the group ELITE Enslave US, which depicts the woman in the interview in Evidence #4 on an episode of Dr. Phil about “Narcissists” & how they operate.  Evidence appears to indicate that during this very real, atrocious event, a small number of “crisis actors” may have been involved in some way.  This video has been mashed up back to back with a video application of a man who is trying out to become an employee as a “Crisis Actor”.

Why are Crisis Actors always at these mass shootings ? ELITE Enslave US

Posted by ELITE Enslave US on Wednesday, October 4, 2017

Oct. 3 a second leak was released via 8chan.  This leak appears to be a diversion to distract from the initial leak, as they do not seem to align with one another:

Here is a video submission of a gambler by the twitter user name of @YouFold2Me who claims he saw Stephan Paddock and girlfriend gambling in across the table from him in Atlantic City, NJ on October 6.  You will notice that the unique brow, nose, shape of mouth, & hairline appear identical.  This may indicate that the photos released of Paddock’s body may be a body double.  After all, MGM International is certainly capable of performing high-quality productions.

UNBELIEVABLE! Stephan Paddock and girlfriend found ALIVE in At…

STEPHAN PADDOCK IS ALIVE? As if the Las Vegas Shooting wasn't already sketchy enough! Here is a video submission of a gambler by the twitter user name of @YouFold2Me who swears he saw Stephan Paddock and girlfriend gambling in across the table from him in Atlantic City, NJ. What do you think? Is that him?

In this next Oct. 2 interview by KTVU News:

In this third October 3 interview by CBS News:

YouTube, owned by Google, is the America’s second most popular search engine, right after Google.  Google has not directed YouTube to manipulate the video channel’s search results to suppress videos asserting that the Las Vegas terrorist attack is a false flag operation.

In response to criticism of some search results on social media this week, YouTube is accelerating the rollout of planned changes to its search engine. On Oct 3 night, the company began promoting more authoritative sources in search results, especially for those about major news events. YouTube doesn’t disclose how it determines which sources are authoritative.“

Which other rooms did Paddock check out, & at which hotels?  See Evidence #9.