An Acre Per Family: Is It Ecologically Possible?

First, take a look at this map of the United States (or any country in the world)– notice how towns & cities tend to be located next to rivers?  This is no coincidence.

Rivers provide water– used for the essential needs of civilizations.  All throughout history, great civilizations have begun along waterways.

There are over 250,000 rivers in the United States, consisting of “over 3.5 million miles of rivers and streams, covering an enormous & diverse landscape” according to the Environmental Protection Agency (“EPA”).

Note: Measuring the exact length of a river is &, and the length can change over time. Many references cite different lengths for the same river- but generally the numbers aren’t too far off.

[Special thanks to MapsofWorld.com for the above map- click to view larger image]

Our organization’s plan is not to give “an  acre of land to every family along a major waterway”, however we did need to begin by addressing what has turned out to be a population myth.  It appears we have a sustainable population at this time so long as people choose to have 2-3 children per couple , and so long as we manage resources wisely.

Nearly all U.S. Citizen’s have been born & raised from within the jurisdictions of Incorporated County and City governments.

How do we know that Counties & Cities are Incorporated?

How Does The Fact That Counties & Cities Are Incorporated Affect Local Government Decisions?

According to 1919 Supreme Court Ruling Dodge v. Ford Motor Co.: “the purpose of a corporation is to make a profit for the shareholders” (Dodge v. Ford Motor Co. 270 Fed. Appx. 200).  Due to the mandate of this ruling coupled with local “customs”, County & City government officials generally prioritize “profit for shareholders” ahead of (for instance) Common Law protections & considerations for all people, such as:

As a Result, People have Suffered:

How Homeless People Have Suffered:

Instead of providing “equal protection of the laws” and allotting land & basic resources to homeless Citizens so they can homestead & live self-sufficient, productive lives, most County & City governments have instead enacted “homeless harassment laws”- which are antithetical to and in direct violation of The Preamble.  This negligent & oppressive behavior has compounded & worsened situations of homeless Citizens, “whose ecosystems have been decimated”, & who “have no means for survival except by maintaining absolute dependence upon participation in commerce“.  Nowhere in The Constitution is it mandated that Citizens have to participate in commerce in order to be able to survive, however due to the preferential treatment generally given to real estate industries & landlords over the needs of all people, Citizens now find themselves “in a game of musical chairs“, except instead of simply “losing the game”, lives are being devastated, & more people are ending up in shelters, dependent upon welfare, & homeless on the streets.

Instead of providing basic resources to enable people live self-sufficient & dignified lives homesteading, homeless Citizens are either arrested or given fines for violating unconstitutional Ordinances which (directly or indirectly) target the homeless & make it harder to get ahead (“kicking them while they’re down”), thus compounding impoverished Citizens’ already dire situations.  “Homeless Harassment Laws” include but are not limited to:

How Renters Have Suffered:

Renters have faced the reality that “if they don’t come up with rent every month”, they will end up homeless.  In contrast, rent is unearned income, & many people simply inherit estates, & thus inherit “rental slaves” while others are born into the “rental side” of this paradigm.  This “do or die” situation for tenants has left people with the ultimatum of “mandatory participation as labor class among the commercial empire” just to survive.  Those who would rather cultivate a piece of property in order to grow food to feed themselves & their family are not (yet) being afforded these basic & available needs, as all properties has been monopolized by Real Estate Associations , homeowners, & landlords who carry great influence upon the decision-making processes by local governments.  This usurpation of land & subversion of common law behind commercial codes has left “those who do not wish to participate in commerce” nowhere to legally “be”, and in a state of “not being afforded basic common law protections designed to be guaranteed under The Constitution” which are designed to protect the general welfare of all people- not just the monied. 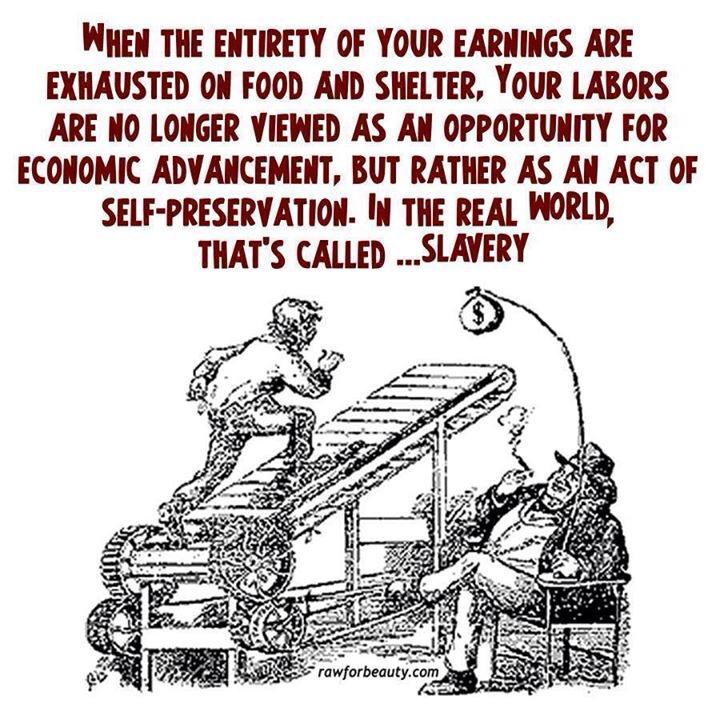 What was once called “the master & the slave”, today is called “the landlord & the master”; general reform & mandatory relief are required by people immediately, as both renters & homeless people are in an absolute state of crisis & dire emergency, with nowhere left to turn but to the government for aid.

How Officers & Officer/Civilian Relations Have Suffered:

Unsustainable & oppressive ways of living (rental wage slavery, homeless harassment laws, maintaining a commercial food supply dependent on animal abuse and wrapped in excessive amounts of garbage) have been upheld & enforced via abrogating common law behind commercial codes & unconstitutional ordinances which are Constitutionally enforceable only through admiralty law (aka “martial” or “maritime” law), a distinct body of law which governs commerce & other maritime affairs (see front page of this website to learn more):

Statutory (aka “civil”, “comprised of fixed body of laws called statutes”) jurisdiction which compels performance, & has Criminal Penalties for not adhering to the letter of the contract– but this only applies to International Contracts.  Whenever there is a penalty for failure to perform, however there is no “verified complaint from a damaged party”- THAT is Admiralty/Maritime Law & there must be a valid international contract in force.  Learn more here.

Within the definition of commerce on Black’s Law Dictionary goes on to clarify that “trade” & “commerce” are technically quite different, yet often confused:

WHEREAS the framework of the United States Government is designed around “admiralty law, with proceeds benefiting the upholding of the commons“, however instead the legal structure has subverted to become “admiralty law, with proceeds being used to reinforce admiralty law & thereby remove common law“, & all United States Citizens and “all persons within the jurisdictions equal protection of the laws” have thereby suffered., having sustained multiple injuries for:

This page is unfinished & will be updated soon!

Founding Fathers & American Revolutionaries rebelled against local governments including Sheriff’s Deputies before establishing the Federal Judiciary, which was designed to protect “the peoples’ rights” against damages caused beneath local governments as had happened for centuries to Indo-Europeans prior to the founding of the Americas.

, thus adversely affecting the health & general welfare of the people living within their jurisdictions in favor of upholding commercial codes over protecting Common law.” living conditions of the people”.  Instead local governments have been caused to have to create arbitrary & capricious codes, ordinances, & customs which incriminate &/or oppress the acts of “having little to no money” &/or “trying to live sustainably”.  Nowhere in the Constitution of the United States is it stated that Citizens must participate in commerce, however today due to centuries of mismanaging natural resources & scarcity of tenable land, participation in commerce become mandatory, leaving no apparently visible way to “opt out” in order to be exert the natural human right to be able to cultivate the land & homestead which is protected under common law.  Due to mandatory commercial regulations, common law has effectively become abrogated to the point where people are being prevented from being able to legally enjoy common law protections & fundamental liberties embedded within & guaranteed in the  framework of the American law system.

This Current Local Government Arrangement is Illegal:, however many Executive Officers were likely Unaware of This:

“The Secretary of State’s office is the central filing office for certain financing statements and other lien documents provided for in the Uniform Commercial Code (UCC).  Filing with our office serves to perfect a security interest in named collateral and establish priority in case of debtor default or bankruptcy.”

after agreeing to the Terms & Conditions to signing into UCC Connect, which include:

13. Indemnification. You agree to defend, indemnify, and hold harmless the California SOS, the State of California, its affiliates, and their respective, officers, employees, and agents from and against any and all claims, actions, suits, or proceedings, as well as any and all losses, liabilities, damages, costs, and expenses (including reasonable attorneys fees) arising out of or related to (a) any material posted or otherwise provided by you that infringes any copyright, trademark, trade secret, patent, or other intellectual property right of any person or defames any person or violates their rights of publicity or privacy; (b) any misrepresentation made by you in connection with your use of the Site; (c) any violation by you of this Agreement; and (d) any claims brought by other persons or entities arising from or related to your use of the Site, including information obtained through the Site. Indemnification by a federal, state, or local governmental unit is only to the extent allowed by law.

14. Disclaimer. Neither the Secretary of State’s Office nor any division, officer, or employee of the Secretary of State warrants the accuracy, reliability, or timeliness of any information on this web site, and shall not be liable for any losses resulting directly or indirectly from such reliance on the accuracy, reliability, or timeliness of such information. Any person or entity who relies on any information obtained from the web site does so at his or her own risk.

After Signing into The Uniform Commercial Code, How This Affects Citizens’ Rights:

Under UCC 1-308, Citizens are required to perform “an explicit reservation of rights” in order to have their Constitutional rights recognized, however under The 14th Amendment “No state shall make or enforce any law which shall abridge the privileges or immunities of citizens of the United States””nor (shall any State) deny to any person within its jurisdiction the equal protection of the laws”.  U.S. Citizens have become damaged parties under the law, sustaining severe personal injuries as a direct result of Admiralty Law  abrogating Constitutional Common Law.  Citizens seeking access to their inherently due, unalienable rights to “life, liberty, & pursuit of happiness”, but who have instead become “trapped” beneath a set of commercial codes which have been used to coerce the populace to have to participate in commerce instead of being given the option to to operate in accordance to Common Law & common law protections- such as adverse possession, homesteading, having access to the Bill of Rights, & so on.

County and City governments are subcontracted beneath The 14th Amendment via certain government codes in order to be able to write their own laws (codes, ordinances, etc.), such as:

This page will be updated ASAP.  Please consider making a contribution because building these websites is a fulltime job plus overtime.

& it is time to “take” all incorporated Counties using eminent domain in order to force local governments to considert he ecologically sustainable living conditions of Citizens, & to ensure basic freedoms are no longer subsumed beneath the “profit for shareholders” motive.  Participation in commerce should be a choice, & those who want to homestead need to be given that option.

Whereas all tenable land has been usurped & monopolized by realtors & landlords, we firmly believe it is time to “take all rental spaces using EMINENT DOMAIN“, & to “give title deeds for those spaces to the tenants”, & “to recognize those spaces as homesteads”. via “reallocating Section 8 over a 40 year period” to “buy out landlords”.  The only way this can be done is if coupled with an ecologically-wise, well-orchestrated “en masse homesteading movement“.